‘Only The Missile’ has been reviewed in the latest edition of Fatea Magazine, appearing alongside another review for good friend of mine Sarah MacDougall who has been staying with me whilst on tour here from Canada, which made me happy. You can read it below or on their site alongside all the others here – http://www.fatea-records.co.uk/magazine/releases.html.

“There are still people that believe that songs have power, that pens, words, notes and guitars are mightier than the sword, that people still take the time to listen. Robin Grey is just such a person.

In “Only The Missile”, he’s put together a set of ten songs that reflect how society can be viewed and the observation of the life that goes on around him. It’s more personal than some, less political with a big p, but none-the-less sharp and cutting. “The Last Time I Saw David” looks at faith and it’s relationship with religion and how it impacts the individual. It’s deep, but not hard going.” 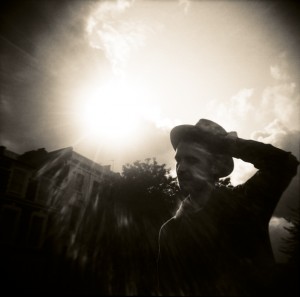 Last week my album ‘Only The Missile’ received an enthusiastic and insightful review on creative commons music blog Catching The Waves. I have reposted a slightly trimmed review below, if you’d like to read the original in all its full glory please click on the following link:  http://soundthefreetrumpet.typepad.com/

“Only The Missile is a 10-track album that will appeal to lovers of Leonard Cohen, folk music, introspection, pointed lyrics and open hearts.

The album’s transparent mix warms the listener’s ears while giving centre stage to the understated vocals although Robin can be feisty as well as fluffy. Take ‘The Last Time I Saw David’, an unflinching tale about overcoming religious hypocrisy to reach an atheistic/agnostic state of mind, ensures that Robin will not be booking a gig in America’s Bible Belt any time soon. It’s refreshing to hear a heartfelt song that isn’t all: “I wuv ‘oo; ‘oo wuv me.”

Then there’s the soothing lullaby of The Finchley Waltz (play it to any baby and watch them drop off), a quintessentially English response to the terrorist bombings in London on 7/7:

I could recommend any track, but I’ll be unoriginal and suggest the opener These Days, an uptempo mandolin and banjo-laden number with a paradoxically slow but optimistic chorus that will get you singing in the bath and, if you’ve suffered because of the credit crunch, because you’ve taken a bath.*

The title track is a toe-tapper with some wailing harmonica – do harmonicas ever do anything else but wail? – and Your Man is another in a seemingly endless supply of huggable love songs. Swan Song and Five (featuring some very welcome ethnic percussion – bongos, tablas, that sort of thing) bring things to a dreamy close – they’re the aural equivalent of a favourite jumper.

Goodness, what a lovely album. It never ceases to amaze me at what talent is lurking in the darker corners of the net. Please think about sending him a little cash, or, failing that, bake him a cake. He likes cake. A lot. Finally, if I may venture a little advice to Mr Grey: tuck your shirt in, young man. This is the internet – we have standards.”

I’ve had a little flurry of reviews in the last week. Anyone up for translating the russian one?!

Robin Grey’s debut album ‘Only The Missile’ will please those music fans who like British folk rock hovering between the lyrical, the traditional and the confessional.

His style reminds me very much of Nick Drake or Robyn Hitchcock, but the songs have the masterful pathos of Leonard Cohen. There’s a sound of regret on the best tracks such as the wistful “Swan Song”. “Five” and “Every Waking Hour” are two other exceptional songs that are mid-tempo and melancholy.

“Somewhere” includes background vocals by one of my new favorite singers Ruth Theodore. Robin Grey is another excellent singer / songwriter that should enjoy a fruitful future with a little help from the music gods.

“this is the fifteenth time we have played Robin’s music… very original, superb lyricist”