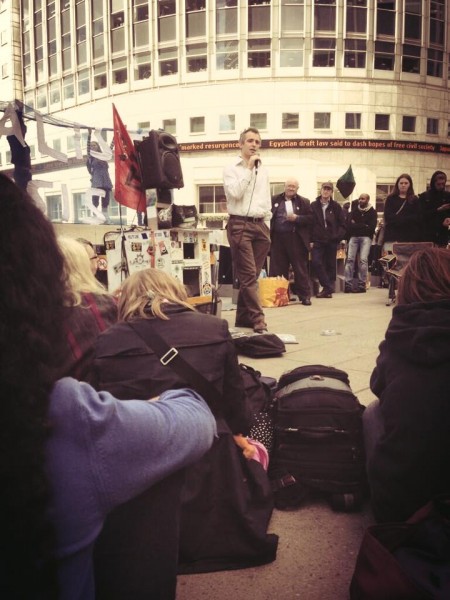 I was sent this lovely photo from the gig I did at Canary Wharf during the G8 protest there last Friday 14th June.

It is the first time I have had the privilege of speaking and singing at a protest and it was an amazing experience. I taught a few songs about equality and challenging unjust laws including Sydney Carter’s song ‘John Ball’ and ‘The Manchester Rambler’ by Ewan MacColl.

Community work I do in Hackney involves me working with the police so it felt sad and strange to be surrounded by them trying to look as intimidating as they possibly can.

Many of the rights that we take for granted now such as the right to vote, the right to roam, the NHS and many others were won by people taking to the streets and I would encourage you to attend a rally or protest if you can, so many brilliant and inspiring minds attend them, not at all the masked hoards of hooded vandals and wrong-doers that the media and government want you to believe. It is important that we find our voices before we lose much of what our forefathers won for us.

I was on after UK Uncut, a grassroots movement taking action to highlight alternatives to the government’s spending cuts and just before Pete The Temp, a musician and poet who really knows how to get a crowd going. Both of them are brilliant and deserve your attention.